Friend of Sartorial.Soccer Mike Keay (check him out on Twitter – @FootieShirtz) has an incredibly varied collection of football shirts with items from teams as diverse as Cheltenham Town, Casino Salzburg, Kansas City Wiz and erm, Aston Villa.

Such is the extent of the treasure trove of tops at Chez Keay, Mike has whole wardrobes devoted solely to Bundesliga shirts.

Within his wardrobe space Mike holds a priceless collection of Bayern Munich shirts, and being as cruel as we are, we set him the challenge of selecting his Favourite Five shirts from FCB.

Over to you Mike!

I’ve been obsessed with Die Roten for a little while now.

What started as a fascination grew into an addiction very quickly, as I started to discover the vast variety of colours and designs that the German giants have worn over the past 30 years.

Any shirt collector will tell you that picking a favourite, a top 5 or even a top 50, is extremely difficult, but I’ve managed to whittle it down, and pick the 5 that I hold above all others, for 5 different reasons.

The first one is easy, the prelude.

What my wife thought would be a great gift to a beginner in the football shirt collecting world, would prove to be the start of something bigger. 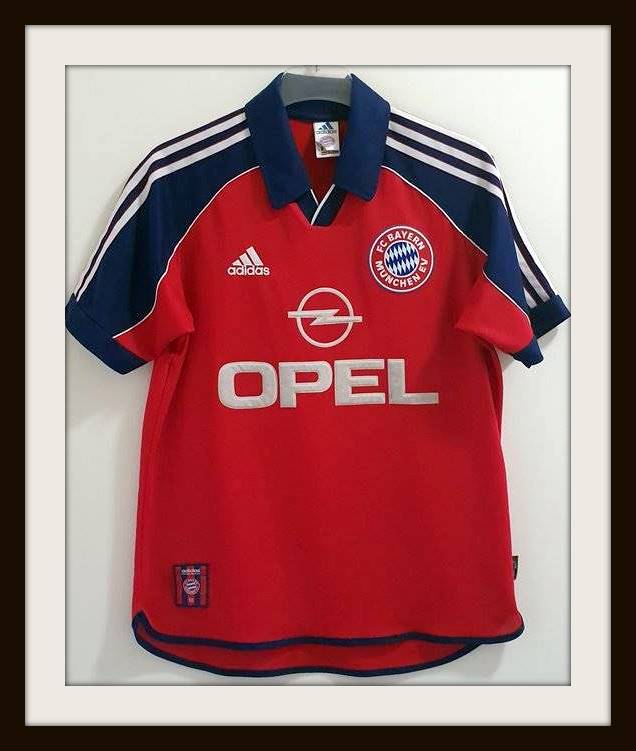 Whilst this shirt doesn’t have the most standout of designs, and features the blue sleeves, a colour which is somewhat frowned upon by die-hard Bayern fans for the association with city rivals 1860 Munich; this is a solid shirt from a solid era.

Elber, Effenberg, Hargreaves and Lizarazu are just a few of the world class players that helped Bayern to consecutive Bundesliga titles over the two seasons in which this shirt was used. 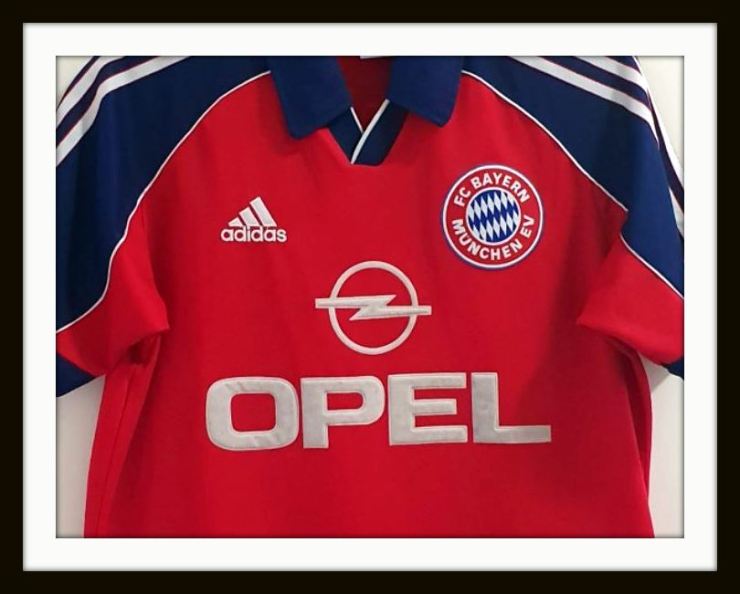 Once I’d really started to delve into the world of German football, and the shirt collection started to expand, a few Bayern shirts in particular started to become must haves for me. 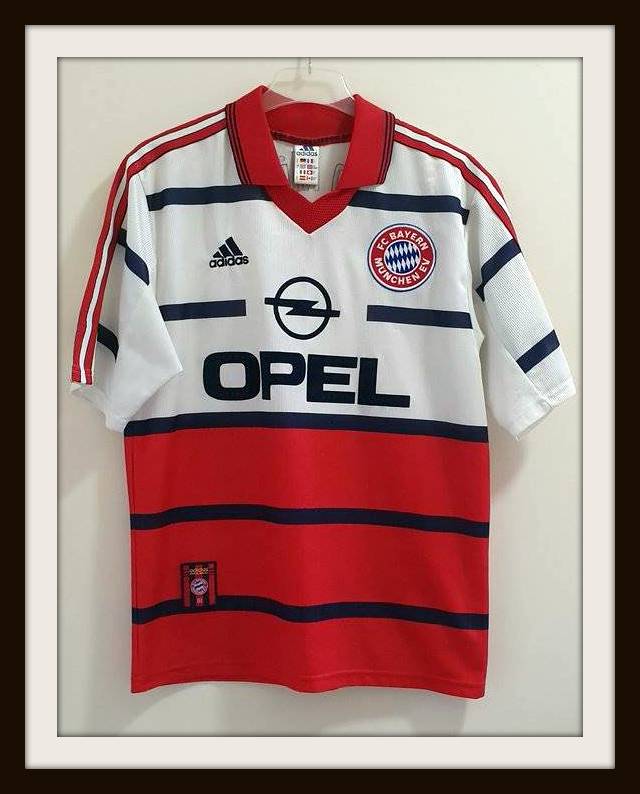 The shirt itself is just brilliant. Gloriously 90’s with its bold design, and baggy fit, and associated yet again with success, as Bayern won countless trophies during the time of its use.

Although for all the household names in the squad, for some reason this one always makes me think of the Iranian legend, Ali Daei! 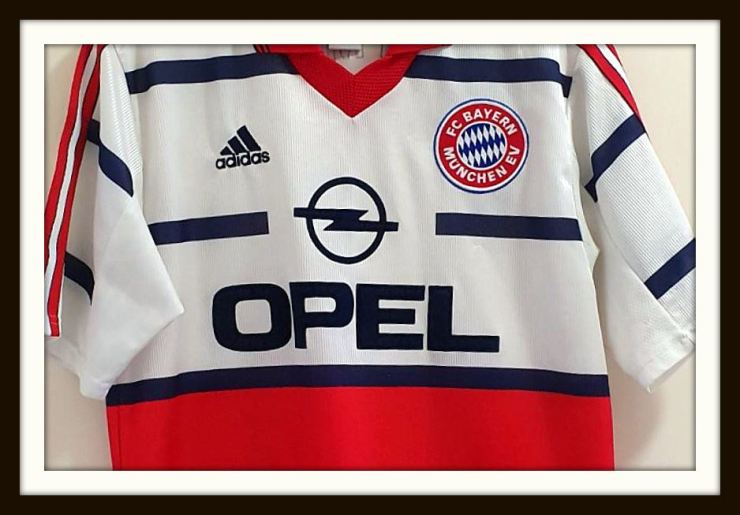 I’ll be honest, I surprised myself when I decided on this one as my favourite based purely on design.

I’m a sucker for anything 90’s, so to pick a relatively new shirt was unexpected. It was hard to ignore some of the greatest shirts in Bayern history, but this one ultimately won through for a few reasons.

Design wise, it’s simply stunning. The much maligned red and blue colour way is nothing short of incredible, and the white Adidas stripes and detailing give it the perfect finish, tying the sometimes obtrusive sponsor into the shirt seamlessly.

The other factor that probably plays a small part is the fit. This one just happens to fit as if it was made for me, which doesn’t happen too often!

This is the only shirt on the list from FCB’s Allianz Arena era and comes from a season when Pep Guardiola’s boys won the Bundesliga title with a free-scoring team including Robert Lewandowski, Mario Götze, Franck Ribéry and Thomas Müller.

This one was a no contest.

This beauty conjures up so many fond memories. 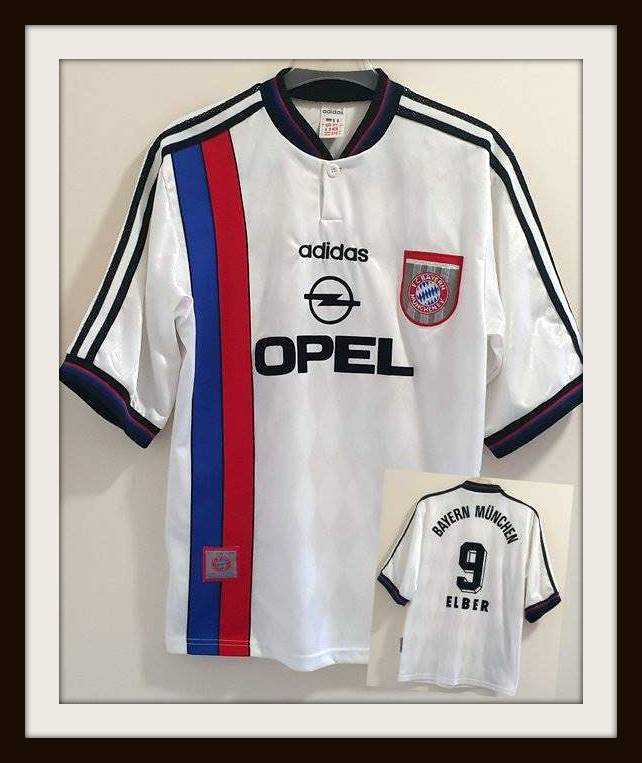 I’m an 80’s child, who grew up in the 90’s, and sometimes, especially with football, I’m still in that decade.

Not only is this shirt absolutely incredible aesthetically, but for me it brings back memories of being 13 years old, shouting Elber as I smashed volleys into the top corner (or more accurately, nestling them into the tops of trees 20 yards wide of the target). 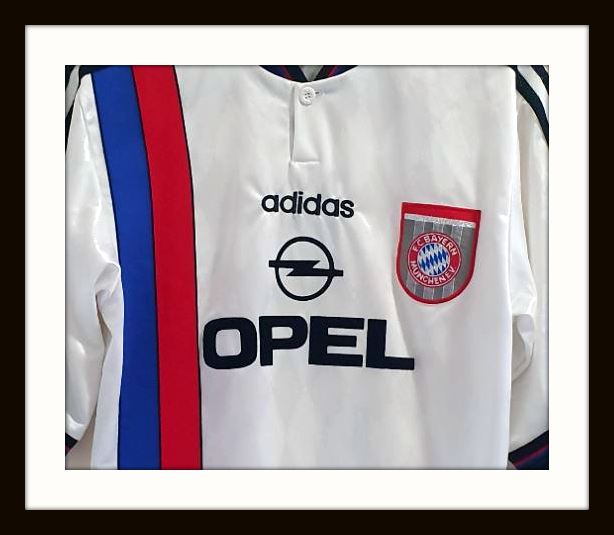 As a teenager, the Brazilian was my hero. I loved everything about him. Style of play, the clubs he played for, and the Adidas Predator boots that he chose to play in.

Whilst the shirt won’t bring back fond memories for Bayern fans, for me, the shirt is one of the best, and whilst its not the rarest of Bayern shirts, it’s proving difficult for me to get my hands on.

I have a handful of shirts I would describe as ‘grails’, and I’ve been lucky enough to tick a few off the list over the last year or so.

However, due to my picky nature when buying these so called grails, I’m still hunting for this one.

Is it too much to ask for one in my size, in perfect condition, ideally with a legendary name on the back?

Well maybe, yes, but the one thing that rings true every time I pick up such a shirt, is that good things really do come to those who wait. So watch this space!

Massive thanks go to Mike at @FootieShirtz for sharing some of the highlights from his collection.

If you have a shirt or collection of shirts you’d like us to feature on Sartorial.Soccer then please reach out through the links below!