Barcelona have confirmed their departure from stripes for the 2019-20 season, introducing a controversial new chequerboard kit in their world-famous Blaugrana colours.

Nike officially list their inspiration as coming from the distinctive grid of blocks that make up the city’s Eixample district, going on to link the design with the spirit and character of those who call Barcelona home.

“It might be different but it is 100-percent Barca and it is even better that the design represents the bond the club has with the supporters and the people who are driving the city forward.”

As well as Piqué, Busquets and Messi, the new chequerboard look will be adapted for Barcelona’s women’s section along with the club’s various sporting outfits from basketball, hockey and rugby to volleyball.

The radical re-design of the 26 time La Liga champions’ kits had been rumoured since shortly after Croatia’s run to the final of last summer’s World Cup, with various online leaks appearing throughout the season.

We expect that Barca’s Croatian midfielder Ivan Rakitić will feel at home in the chessboard style shirts, but for a club with such rich traditions, the 2019-20 kits have not been roundly applauded by the club’s global army of culés.

There are those who point to Barca’s first 112 years without a corporate sponsor emblazoned across their midriff and chart the quest for shirt sales as running against the soul and “Més que un club” principles the Catalan club strives to live by.

Last year, club members rejected plans to remove the “FCB” from their crest in a re-design of the badge last updated in 2002. Barcelona also apparently vetoed Nike’s proposal for a mainly white away kit for the coming season, wary of another backlash from those who naturally connect the colour to arch-rivals Real Madrid.

Whilst we’re not sure we buy the bumpf about Nike being influenced by Modernista architects like Antoni Gaudí, keeping supporters satisfied with fresh designs is an annual battle for manufacturers like Nike and Adidas; who drew scorn recently for abandoning Juventus’ own stripes for halved shirts.

Barca fans unhappy with Nike’s latest deviation from their bold and brilliant Blaugrana stripes will know that they can always wait 12 months to buy next year’s shirt which will more than likely return to a more established look and break revenue records all over again.

Nike and Barca have strayed from stripes to justify their astronomical kit deal before, having produced half and half shirts in 2008-09, and introduced hoops to Barcelonistas in 2015-16; but in our opinion this new disrupted jersey works a whole lot better as a Barcelona kit than either of those previous efforts.

With details such as Catalonia’s Senyera flag in the collar of the shirt and that special shade of red and blue, even the lack of stripes can not take away from this being instantly recognisable as a kit belonging to FC Barcelona.

The Barcelona shirt is an international icon of football, symbolising much more to fans who wear it than simple sporting allegiance and it’s a shame that the club must occasionally move away from their traditional stripes.

Whilst Barca’s rivals may only change the shape of their collar and colour of their trim each season, perhaps Nike’s variety of design should actually be applauded.

What do you think of Barcelona and Nike’s new chequered kit? 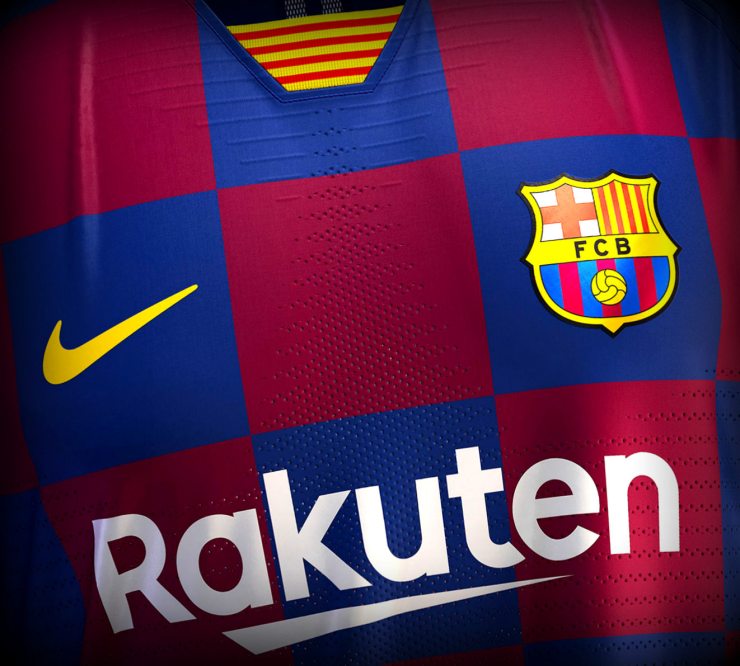